A huge explosion rocked downtow Cairo this morning, with reports emerging it was caused by a car bomb, 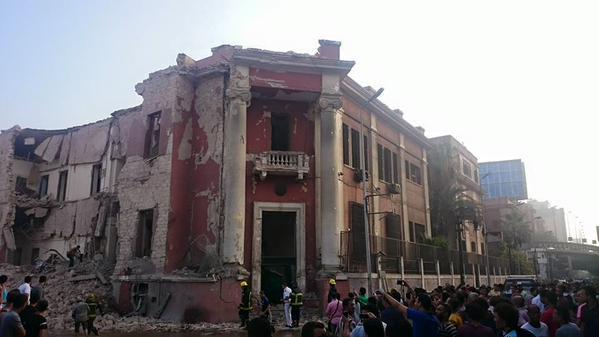 At 6:28 AM this morning a large explosion hit Cairo as confirmed by Reuters news agency and many people on Twitter. The effect of the explosion spanned a vast area with people tweeting from as far as Garden City, Maadi, Giza, Haram st. and Downtown. The epicenter was behind Ramsis Hilton at the Italian Consulate. At least one person has been announced dead, and five injured according to health ministry. Police are reporting it was caused by a car bomb. More to follow.

#BREAKING: A large explosion has just gone off in central Cairo. No information on casualties, damage, or injuries yet. More to come...

Several Cairo tweeps are on about what sounded like a huge explosion. #Egypt

I have just woke up on the sound of a huge explosion in Cairo !!!

Explosion in Downtown Cairo. Smoke rising from behind Maspero and the Ramses Hilton. https://t.co/PJuyu92kXq

At least 2 ppl were injured in the explosion outside the Italian consulate in downtown Cairo: SkyNews Coresp #Egypt &#10;https://t.co/qTOvfQRakQ

Early report from BBC News, citing AFP, says at least five have been injured in the Cairo blast http://t.co/goidnjnne5


there are pieces of a car scattered all over the places, some flew in the garden across the street.


PHOTOS: Aftermath of the explosion at the Italian consulate in Cairo. Credit: Mahmoud Amir (Facebook) pic.twitter.com/UdH1JMIO3W

One dead in blast at Italy consulate in #Cairo: health ministry


Waking up to sad news of yet another terrorist attack in Cairo - this must stop! https://t.co/OwIo3VU9ek