As the Spark Entrepreneurship camp took off last weekend in El Gouna, 34 young change-makers geared up to craft the startups that will leave their mark. From NGO founders, to stock traders, to scientists patenting inventions at 16, these are the teenagers changing Egypt. 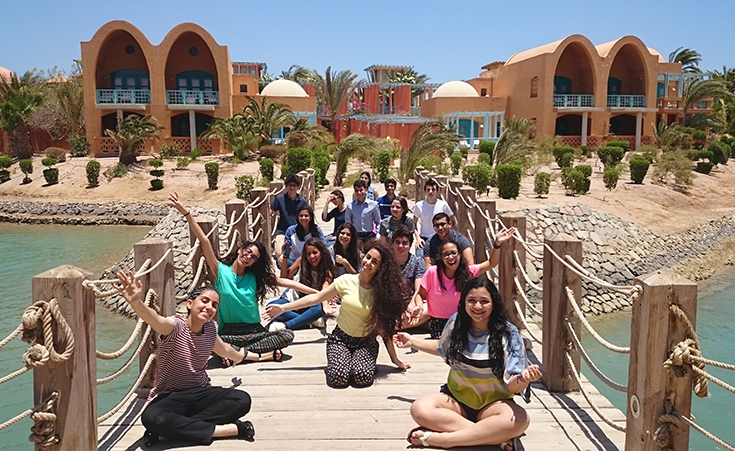 Kicking off last weekend in the coastal town of El Gouna following a five-year hiatus brought along by the 2011 uprising, the Spark Entrepreneurship camp gathered 34 of Egypt’s most promising youngsters for a week of training, inspiration and hands-on planning as the business-driven young minds set out to mold their own futures.

The camp was first launched in 2007 by Sherife AbdelMessih, CEO of Future Energy Corporation and founder of Spark Ventures – since then, it has seen the rise of their change-maker alumni, including Coterique’s founder Dana Khater, Mohamed Sherif El Dib, a Global Shaper and founder of Monkeys and Tuxedos, and CairoSitters mastermind Hossam Taher, who has just raised a seed fund and announced it at Berlin’s Tech Open Air conference.

“We always knew there was an appetite for this kind of programme. Our philosophy is taking people with fantastic potential and providing them with polishing, confidence, and skills to pursue their own dreams,” says Programme Director Ramy Khorshed.

The 10-day camp, which includes entrepreneurship training for fresh graduates and university students, as well as a summer camp for high schoolers, kicked off last Thursday – introducing business and tech leaders such as Mori Sushi’s founder Tamer El Leith, and CEO of Affectiva, Rana El Kaliouby.

“We aim to trigger behavioural change, inspire individuals to start businesses, and give them the knowledge they need to get on their feet. A lot of entrepreneurs who don’t have a background in business run into a lot of problems that they could have avoided – so, this is the knowledge and training we're going for,” says AUC´s Venture Lab manager - and a Spark alumni himself - Sherif Kamal Shabana, who now acts as one of the counsellors coaching the camp's young entrepreneurs.

“In terms of acceptance rate our standards are pretty close to an Ivy League university,” adds Khorshed. “We are looking for passionate people who are on top in their areas of interest, which is validated by their previous experience and extracurricular activities.” However, one thing that is essential to their approach, he adds, is that grades and external exams are not considered when processing applications. “We are pretty agnostic with regards to academic success. That's not what we mean when we say 'top kids'. It's really about those who have demonstrated their talent and the best use of the resources that they have – that's why we also have participants from public schools,” he explains.

CairoScene spent a few days among the students and future entrepreneurs taking El Gouna by storm this week – we met astonishingly inspiring change-makers who are making remarkable impact not only in their communities, but also on a global scale. These are just four of many:

“I had seen all these movies about the stock market, and then seeing thousands of people watching GoPro go public was an awe-inspiring experience – so I got interested in the stock market,” says Refaat, a 16-year-old business juggler who is now planning to launch his own startup. “I bought Stock Trading for Dummies and invested the ‘birthday money’ I received on my 14th birthday,” he says.

Refaat created an online account and learned the ins and outs all by himself, reading books and contacting experienced traders. “At first, I blew it all as soon as I put real money into the programme. I lost $200,” he says. “So, I spent around four months trading on a practice account, just to get the hang of it. But when I asked my dad for money again, he refused.” Unwilling to give up, the young entrepreneur sold a four-letter web-domain for $1600 and invested the funds into his account. “When I started making profit, I pulled out the money and returned to my dad the $200 that I lost. Showing him the invoice was definitely an unforgettable moment,” he says with a smile.

“I started with the foreign exchange because it allowed me to invest very small amounts. One of my most recent profitable positions was selling GBP/USD during the Brexit,” he narrates with clarity. Recently, however, he decided to stop trading in order to focus on his first startup: Tabakhy. The platform will link chefs to clients, or people hosting 3azoomat (gatherings). “I have the business plan and the prototype completed – I just have to do a few tests to prove that there is demand. I also need a little bit of funding to develop the app in the coming months,” he says.

Inspired by people "doing great things" around him, Refaat does not worry about spare time or having fun. “My philosophy is 'work hard, play hard!'” he says. “The world is getting more and more competitive, and I see people around me doing great things. There is very high competition, so, these people push each other to change lives, not just lurk behind a computer – there are so many things that we can do now, thanks to the Internet.”

“I developed this composition that can stop a life-threatening wound's arterial bleeding in just about seven to 10 seconds;” her words do not seem to match the sweet 17-year-old face pronouncing them. Despite her young age, this researcher and entrepreneur is now patenting an invention that could not only make money, but also save millions of lives.

“I was focused on that topic because I’ve always been interested in scientific research. I wanted to do something that can impact a lot of people, but was unfortunately not getting enough attention in the science world right now,” she says. While going to high school, she embarked on a restless search to find out the cause of most deaths in hospitals: severe bleeding.

Doing research on her own, she began knocking on doors until she borrowed a lab at the Albany College of Pharmacy in New York – where she resides – and, a year later, came up with the composition. Her mixture of chemical components can stop lethal wound bleeding in seven to 10 seconds, a rate that defies the 15 minute rate that it currently takes for blood clotting. As she takes part in the camp, Mousa now plans to commercialise the product in a way that benefits those who need it the most.

At 16, Abdelkhalek proudly acts as the president of Citizens of the World Society (COWS), an international non-profit organisation encouraging community service amongst hundreds of students across Egypt, Nigeria, and Morocco. “We focus on students in grades 9 to 12, and they can choose the community services that best suit them,” he says. “Some people are in a bubble and don’t know what’s happening around them. We often go to villages in Faiyum, where children do not even have clothes – once the students see that, it becomes a habit for them to continue community service even after they graduate from high school,” he adds with striking wisdom.

The young activist started while he was attending an international high school in Nigeria, as he had the opportunity to get involved in community service. When he returned to Egypt, he decided to create a local branch. “I was inspired by GIN (http://globalissuesnetwork.org/Global Issues Network), and how they became an international organisation. But, I wanted not only to talk about issues – I wanted to do something about it. As the situation in Syria worsened, we created a lot of fundraisers to send money through UNICEF. We also raised awareness for people to understand what’s happening there,” he says.

Starting off with 14 members, he expanded the organisation to 70 members, and managed to secure a sponsor who makes a yearly donation. Now, aiming to learn social entrepreneurship at the Spark summer camp, the young change-maker aims to establish a social business, while preserving COWS’s identity as a non-profit organisation.

“Usually at school, nobody takes care of your performance,” says Omar, the 20-year-old founder of School.inc. Having interviewed 1,500 students online, he developed a mobile and desktop application that sets out to be “the student's best companion.”

Customising contents for each student, the app was surprisingly successful among the UK's academic world. “Whenever they need to get material, or enquire about anything, the app gives them an answer. It’s customised according to the student's performance, enquiring age, study habits, subjects of choice, and hours intended to devote to each subject. It's based on the British curriculum,” says Omar, who studied at an international school under the British education system.

The young entrepreneur, who landed his first job when he was 14, learned the tricks of the trade and began taking samples and researching on his own, aiming to develop his startup. As he takes part in the camp in an aim to develop a solid business model, his focus remains clear. “I now want to expand not only vertically, but horizontally, in order to be present in more countries. So far, we’ve only invested $10 in marketing and got $600 of revenue,” he says. “If, in a year, we can get 40,000 downloads and 300,000 website visits, it means we will just need to validate the need in different countries.”