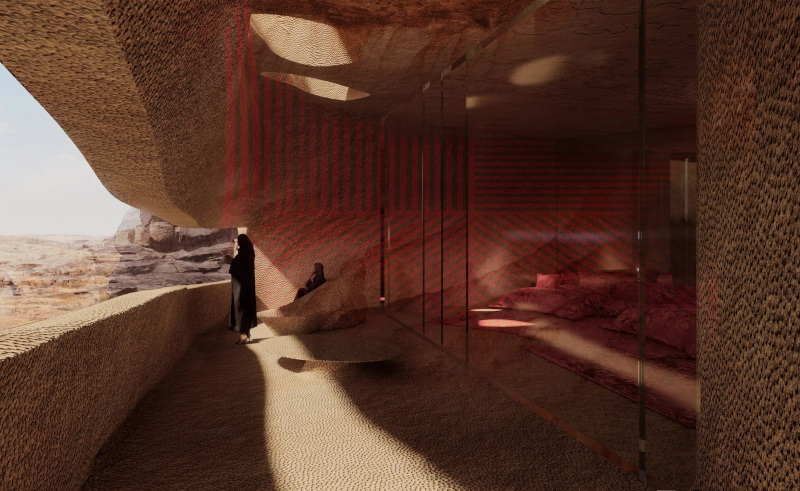 Inspired by the Nabataeans, an ancient nomadic people who roamed the Arabian Desert and formed a powerful kingdom, French architect Jean Nouvel drew up a concept that celebrates Saudi Arabia’s AlUla Desert in perhaps the most direct way possible: by carving a hotel straight into a sandstone hill. The Sharaan Hotel is a gorgeous cave stay, looking to bridge the gap between AlUla’s desertscapes with its rich history, and the luxury offerings that are steadily becoming available throughout the kingdom.

The idea for this subterranean resort came into fruition when architect Nouvel happened across Hegra, an ancient Nabatean city in AlUla desert, and Saudi Arabia’s first UNESCO World Heritage Site. Dating back to the 1st and 2nd century BC, Hegra was the southernmost city of the Nabataean kingdom, which stretched across the Arabian Desert and reached as far as Jordan, where they carved out the famous city of Petra as their capital.

The Sharaan Hotel has a circular courtyard enmeshed into the sandstone hillside, serving as the focal point from where the hotel unfolds. The rooms make up the perimeter of the courtyard, surrounding a central 80-metre high lift shaft. Said to feature only 40 rooms, 3 villas, and 14 pavilions, this exclusive stay will include restaurants, a large spa and other amenities, and serves as a cultural link to the Nabaaeans’ sandstone homes.

Maintaining a distinct aura of attractiveness, AIUIa Desert has been developed as an open-air museum. Nouvel’s architectural genius is scheduled to debut in early 2023 amongst its historic dunes.