The first Egyptian to ever land a spot at Red Bull Music Academy, Bosaina has blossomed into a solo artist to be reckoned with, producing ambient electronic jazz that commands attention. Ready to take Cairo's underground overseas, she opens up... 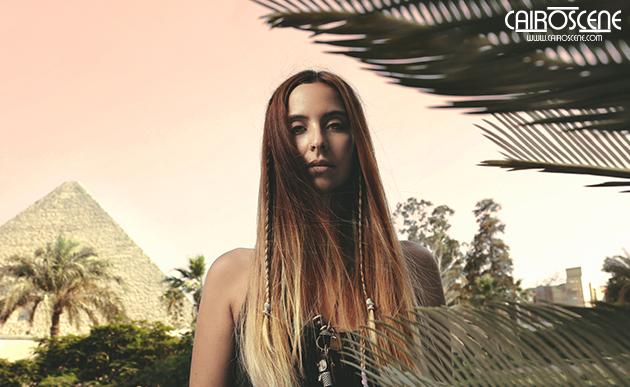 When she walks through the doors of the historic Mena House Hotel, Bosaina visibly glows. That’s not to say she doesn’t usually glow – the singer, songwriter and producer is what the entertainment industry would call a Glamazon; long legs,  golden skin, high pony tail et al. But the radiance and strength captured in our very special shoot connotes a much more spiritual aura. Indeed, before we met she extolled the virtues of this mysterious and magical location, writing to me that “being so close to the pyramids = energy and I felt it a few days before the Red Bull Music Academy announcement when I was here... energy, energy, energy.” The announcement the 27-year old artist speaks of is her selection in this year’s intensive workshop and platform for established and upcoming musicians from across the world, organised and fuelled by the drinks giant. This year it takes place in Tokyo and marks the first time since the programme’s inception in 1998 that an Egyptian makes the cut. However, Bosaina is quick to interrupt my awe – “Just because I’m the first, it doesn’t mean I’m the best, you know?”

Now Bosaina is not a new name on Cairo’s burgeoning creative scene but her latest reinvention of herself requires special attention. Yes, this is the same girl who lived the bohemian life in London, got booed off stage at Sakiat El Sawy and engrained herself into the collective consciousness of Egypt’s music scene in that palm tree printed number, firmly giving the musical middle finger to the post-revolutionary state with the Wetrobots. But something about her demeanour today; the way she speaks of her work and vocalises her ideas (and there are a lot of them) suggest we’re just at the tip of the pyramid when it comes to uncovering what she has to offer. And that, it seems, was tempting enough to get the Red Bull music pros pulled in too, selecting her out of thousands of applicants on the back of her submission; an EP simply titled NY, Apr-Jul 2013 – an ambient, jazzy little collection of electronic tracks that, the more you listen to, the more it reveals itself to be much more than the sum of its raw, industrial-feeling parts.

“It started with the subway,” recalls Bosaina about her time in New York where her latest tracks were recorded. “I collected so much music, what with people playing trumpets, guitars, drums, singing, groups and troupes and big belters and preachers ...I always made sure that I gave each artist with a coin jar a dollar. It became a symbolic gesture and part of my process, a dollar for a sample.” Her transition from singer/songwriter to producer was not on a whim, however, and it’s something she admits still struggling with today. “Most of the things I consider fun, like production, are reserved for boys. I'm still working through these insecurities about being a girl. Socially, anything I did that was remotely experimental or expressive was ridiculed. That's the root drive; wanting to be taken seriously as a woman and an artist and to be both those things without compromise. For more obvious reasons, I was just getting bored of watching all the guys hovering over the laptop and feeling like an idiot.”

After teaming up with the Wetrobots for an explosive EP, carving out a genre all their own – not quite Electro, not quite Punk but with tonnes of attitude and a sprinkling of Pop – she quickly became the lynchpin for alternative musical collective KIK, still working with Ismail Hosny and Hussein El Sherbini, but adding local like-minded musicians Zuli, Nader Ahmed and Asem Tag to the mix, creating a sort of Rubik’s Cube-style formula spurring different collaborations within the group including Vent, Wonderful Morning and Quit Together – Bosaina’s experimental duo with Zuli that seemed to take her music from reactionary to revelatory. “My solo music is very personal, though,” she adds, giving a little insight into remaining the only woman in her proverbial drum circle.

Her use of samples is the defining factor of her latest aural incarnation but alongside proving her production prowess, the EP conveys more of the strong, solitary woman she speaks of than she perhaps intended. Each of the tracks is undeniably unique by the very nature of using field recordings, but it is each of these sounds – be it a child screaming in the park beneath the Brooklyn studio where she composed most of her pieces or the sound of a train, metal against metal, rhythmically roaring through a platform or even the scattered sequences of a busking trumpeter on that very same platform (“I just whip out my iPhone and press record!”) – it is these minute details that give the impression of a lone musician, singlehandedly facing the world armed with nothing if not her integrity; for who else could have captured that singular sound from a sea of noise than the person standing alone, searching for something to stir her soul? “I'm supposed to be going back [to Cairo] and I'm smoking a cigarette on this bench on the upper West side and the train just rumbles from underneath me... Two weeks later I'm on that same bench, letting it all out to a complete stranger… how I enrolled myself in Dubspot to make that EP, how scared I was that this was an impulsive decision, how I backed out of my commitments in Cairo to stay...”

This kind of fierce fragility, that loneliness in new territories, both geographical and metaphorical, transcend into the new sound Bosaina has introduced with this EP. She’s veered away from singing bar two tracks acting like a crescendo in the middle of the record and it’s clear that not only her trajectory but her outlook on music as a concept has changed. “I began questioning my influences on a more progressive level, breaking down a lot of this formulaic conditioning I got most of my influence as a songwriter from. The [KIK] boys were doing so much for me but my ideas are always very specific. I contributed a lot of production ideas that they helped translate via Ableton and still, I was getting messages from guys looking for a vocalist and I'm like sorry buddy, I'm much more than a vocalist. But their question marks were valid. Was I really more than that?”

Determined to prove that she could break out of the box she had somewhat created for herself, her application for RBMA was shaping up in under three months, each track dated like milestones. The EP is driven by her experimenting with a vintage Wurlitzer, creating unique noises and deconstructed melodies. “I really connected to it… It had this very sad vibrato. Its sustain, release and the little clicks [it makes] when I'd let go of the keys would give me chills."

“On April 26th 2013 I needed to sing so bad,” Bosaina explains of the two tracks laced with her sultry voice (featured in the video above), effected for a delicious cinematic feel. “I'd stopped for a while because I'd been expressing myself with my voice for years and all of a sudden I have all these other voices at my fingertips, accessible by keyboard and mouse and various controllers... Later on, when I started polishing the pieces, I didn't feel any desire to add vocals. I was very serious about making beats and getting into RBMA as a producer.” Her RBMA profile highlights her “corrugated, hand-finished jazz,” which is an apt description as, from a listener’s point of view, she seems to have created each track with an artisanal approach. A sample here, a few keys there, a touch of synthesised strings, a dash of hushed whispers – stretched out, distorted, rearranged, arranged and rearranged again until it took shape, speaking volumes of the professional and personal journey Bosaina’s been through. Maybe it takes a few months in New York to turn pride and perseverant pipe dreams into inspired, independent artistry. And maybe it only takes a few weeks in Tokyo to turn Bosaina into a star.

Keep up to date with Bosaina on her Facebook page here.

Photography by Hady Geneidi. Shot on location at The Mena House Hotel.