With more than 25 million users worldwide, and the attention of tech blogs, internet giants and foresighted investors, Instabug and the team of geniuses behind it are putting Egypt on the startup map. Valentina Primo speaks to fouder Omar Gabr to find out more... 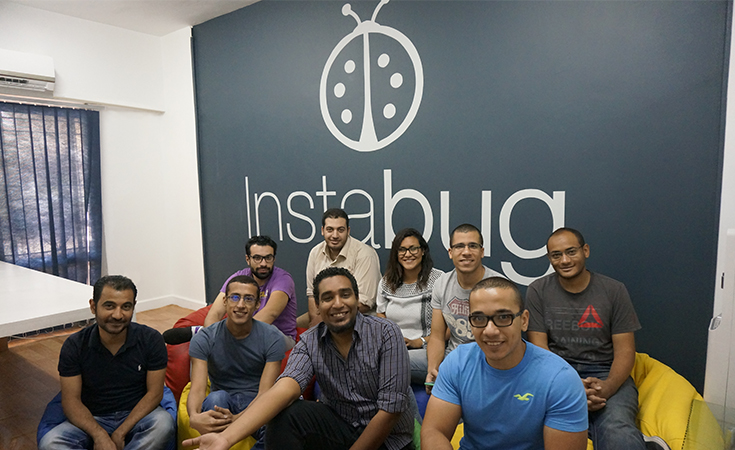 They kicked off with a $10,000 fund and now manage 70% of their operations abroad: Instabug, the Egyptian app designed for users to report bugs by simply shaking the device, has conquered Silicon Valley and has been buzzing across international media since its founders Omar Gabr and Moataz Soliman set up business in 2012. As they launched a revamped version of their successful bug tracker and sealed partnerships with American company Asana and the Danish Zendesk, the startup’s founders tell CairoScene the arduous journey that led to their success.

“It’s actually quite a dramatic story, we went through a lot,” says Gabr. Together with his partner Moataz Soliman, the 25-year old entrepreneur set off to start a company right after graduating from Cairo University, in June 2012. “The idea was originally to build a platform for developers, because we were building mobile apps and there was no tool to make sure they were not crashing,” he explains.

Having obtained their first round of funding by Egyptian accelerator Flat6Labs, they refined the concept and, by the end of the year, their landing page was set up. “We created a short video to explain how the product worked. We were listening closely to make sure that people liked it, and the bug tracker was a brilliant concept getting a lot of traction, so we decided to discard the idea of A-star apps and build a prototype,” the entrepreneur says.

The result, Instabug, is a tool that allows mobile app developers to get user responses directly from the app and automatically receive details like device model, carrier, and location. Whenever a user wants to send feedback, all they need to do is shake the device. Obtaining a feedback form that includes a screenshot of the app, the user can press the submit button, and the developer is notified instantly with a full environment report.

The developer can then collaborate with the rest of the team on fixing the bugs reported, assigning them to a specific member, and use Instabug to notifiy the user that the bug has been resolved. The benefit is two-fold: users can give feedback easily, while developers avoid negative reviews.

As users continued to grow, the duo entered the MIT Enterprise Forum Arab Startup Competition in 2013 to obtain more funding. “We applied with 4,000 other startups and got selected among the semi-finalists,” Gabr recalls. Competing with 60 startups, from Morocco to Saudi Arabia, the team completed 20 pitches during their stay in Qatar, where the competition was being held, and took home the first prize of $50,000, which they invested in boosting performance, expanding, and new hires

Packed with renewed funding and a global vision, the entrepreneurs set eyes on Silicon Valley, setting off to debut at VentureBeat’s Mobile startup competition in San Francisco. However, Egypt's political turmoil would stand on the way. “We were chosen as one of the top five innovators in mobile worldwide,” says Gabr. “We were the only company from the Middle East; everything was perfect and we had everything ready, but it was June 30th,” he says, anticipating the story he is about to tell. As protesters took to the streets to demand the ouster of former president Mohamed Morsi in what turned out to be one of the most turbulent periods in Egypt’s history, the US Embassy in Egypt closed leaving the entrepreneurs with no visa to attend the competition.

Unable to leave the country in time for the conference, the young entrepreneurs managed to have a friend present the product on stage at the competition, attracting an unexpected global audience. “We were covered by blogs worldwide, usage was growing really well; we got 10 times more traction than we had in the previous year," Gabr says.

Still actively pursuing their aim for Silicon Valley, the duo travelled to the US some weeks later, in an attempt to build a network and expand operations in the international capital of tech startups. And persistence bred fruitful results: they successfully closed a $300,000 round in seed funding by angel investors and venture capitalists from the Middle East and beyond, and were selected to participate in Blackbox Connect, a two-week immersion program for non-U.S. startups sponsored by Google entrepreneurs.

“It was a very important experience, because you stay in their house for two weeks and it kick starts your network in Silicon Valley. We were really looking forward to meeting our potential consumers: Google, Facebook, Evernote, Apple, Pinterest, Dropbox, Twitter, Yahoo... We made sure to meet the top of the top,” says Gabr. Having doubled their userbase to 25 million end users in 2014, the team launched a revamped version of the app, added support for Android, and launched their first prizing plan in 2015.

“Things are going really good and we are planning on expanding revenue and user base in different markets through the coming year,” the entrepreneur says. The key to success? Their team of 10 professionals. “It's the main asset we have. It’s not the product; it's not the investment. When you have a team of brilliant engineers that have full ownership and responsibility in the product, each of them focused on one single goal, they can create wonders,” he concludes.