the mural speaks volumes on the hospital’s unwavering desire to not only heal physical sickness but alleviate the mental turmoil that they accost. 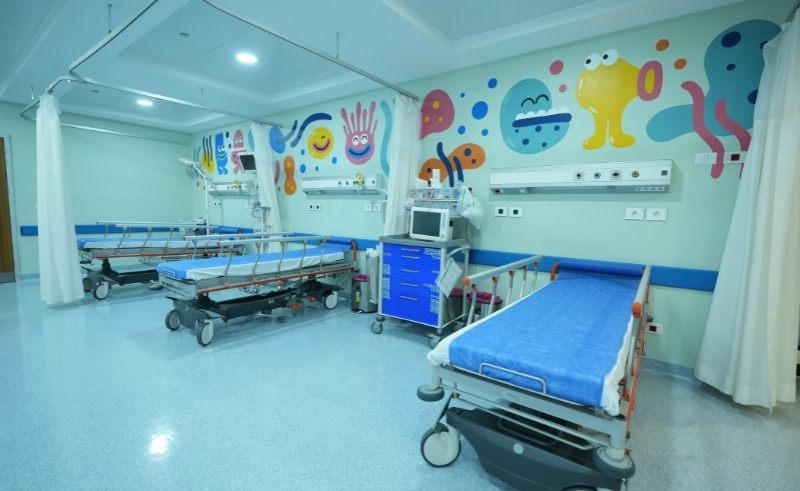 Whilst illness and its affiliated emotional wounds cannot be stitched closed and remedied through a series of fine-tuned motivational quotes and celebrity encounters, the small-scale actions aggregate into meaningful movements, inspiring hope, comfort and even just a sense of normalcy in trying times. Al Nas Hospital - one of if not the largest paediatric charitable hospitals in the MENA region - partnered with freelancing hub Inploy to paint a mural dedicated to soothing their patients’ emotional battle scars.

“Various areas of the hospital have been transformed into different themes, with this latest mural created as a reflection of the wild imagination and fantasy world of children,” Donia Hosny, Child Life Specialist at Al Nas Hospital, tells CairoScene. “The mural reflects shapes, colours and characters that can be a source of distraction during the extremely stressful period of waiting one undergoes before surgery.”

Fully funded by Inploy and brought to life through the talents of multi-disciplinary art studio Hedayah Studio, the mural speaks volumes on the hospital’s unwavering desire to not only heal physical sickness but alleviate the mental turmoil that they accost. “Since hospitals are generally a place of anxiety and fear for anyone, especially children, we have worked hard to create a child friendly environment in order to instil more positive associations to the hospital for the kids,” Hosny continues.

A bountiful blend of colour and whimsical illustrations, the mural recounts a universe whereby pain is but an obsolete sentiment. Much like the precariousness of the cards the children have been dealt, there’s an uncertainty that grounds the artwork; one that is actively mimicked through its floating and untethered demeanour, and invites children to redirect their energy and let their imaginations run free.