What We Know About EgyptAir Flight 804's Disappearance Over The Mediterranean

Information is emerging about EgyptAir’s Airbus A320-232 that has gone missing this morning on its way from Paris to Cairo. 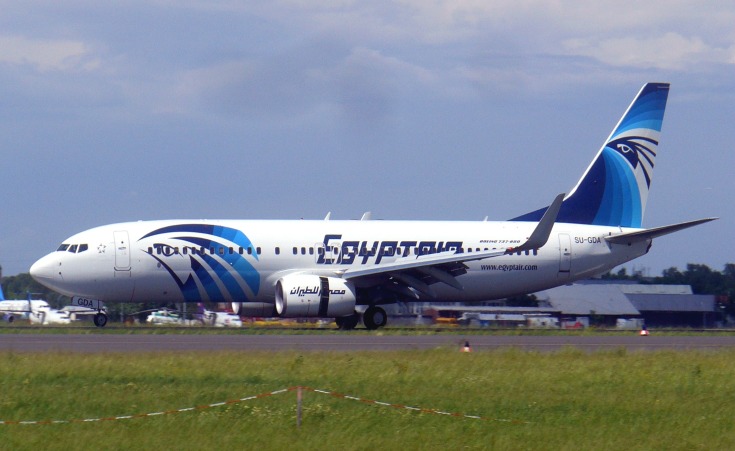 News has been rapidly surfacing about EgyptAir flight 804's disappearance en route to Cairo from France on Thursday at 2:30 AM Cairo time, according to The Guardian. A list below shows information gathered from the updates about the news so far from the same source and EgyptAir’s Twitter account.

FRIDAY MAY 20th, 2016
2:00 PM: Debris, aircraft parts, and passenger belongings were found 180 miles north of Alexandria, according to the Egyptian military, as per CNN.

7:10 PM: People are taking to social media with the hashtag #PrayForEgyptAir. 4:29 PM: The head of Russia’s domestic intelligence agency has said he believes the plane was brought down by a terror attack “in all likelihood.”

Alexander Bortnikov, head of the Federal Security Service, called for governments to come together to track down those responsible for the “monstrous attack.”

3:41 PM: Signs of possible wreckage were found off the Greek island of Crete, a Greek military spokesman told AFP.

“There have been finds southeast of Crete, inside the Cairo flight information area,” General Staff Spokesman Vassilis Beletsiotis said. He added that an Egyptian C-130 plane had spotted the floating objects, and ships would be sent to investigate.

3:33 PM: An RAF landing ship has been ordered to help in the search, according to the BBC’s defence correspondent Jonathan Beale. Defence secretary Michael Fallon has also offered to deploy a Hercules aircraft.

3:15 PM: In his briefing to reporters Fathy admitted that the Egyptian authorities mistakenly reported that a signal was received two hours after air traffic control lost contact with MS804.

The two objects appeared to be pieces of plastic in white and red. They were spotted close to an area where a transponder signal was emitted earlier, the sources said.

2:51 PM: Fathy states that the cause of the crash was probably a terrorist act rather than technical difficulties

While Minister of Aviation Sherif Fathy continues to evade question, Egyptian Prosecutor General has ordered a state security investigation regarding the missing plane.

1:59 PM: “When I have facts I will tell you the facts,” Fathy tells an increasingly rowdy press conference. “What else can I do?” he asks reporters.Earlier Fathy said a terror attack or technical problems could not be ruled out as possible causes of the crash. Fathy said he did not know where the plane was.

The organisation’s chief inspector, Keith Conradi, said: “We were saddened to hear that EgyptAir Flight MS804 was reported missing this morning. The Air Accidents Investigation Branch has offered to assist the Egyptian authorities with their investigation.”

The meeting addressed the disappearance of the EgyptAir flight en route from Paris to Cairo. Minister of Civil Aviation Sherif Fathy presented a report detailing the information available so far on the plane’s disappearance. The National Security Council decided to continue search efforts through Egyptian aircraft and naval vessels and work on unraveling the circumstances surrounding the disappearance of the plane at the soonest time possible in collaboration with countries including France and Greece. The council also directed the government to provide all assistance possible to the families of the passengers and crew. It also directed EgyptAir crisis center to follow up on the development of the situation and announce the latest information.

12:50 PM: The plane was said to have made "sudden swerves" before it fell as per Greek's Defence Minister statement to Reuters.

12:40 PM: French President François Hollande during a televised press conference confirm that the flight has crashed. BBC's translation of the president's statement follows,

It was feared that this plane had crashed. The information that we have managed to gather confirm alas that this plane has crashed, and it has disappeared. 66 passengers were on board, including the crew and security personnel. Among the passengers there were 15 French citizens. A crisis cell was actioned immediately.

"Alongside the Egyptian authorities we are making sure that all the families should be informed during this test. Our thoughts and solidarity and compassion are with them.

We have a duty to know everything about the causes of what happened. No hypothesis should be ruled out. Everything should be put at the disposal of the Greek and Egyptian authorities so that we can liaise with them. We have to send them ships and planes to find where the plane crashed, and to do whatever we can to collect the debris. That will allow us to find the truth.

It could be a terrorist hypothesis but at this stage we should express our solidarity to the families and to find out the cause of the catastrophe.

We will find the truth."

Officials in Athens have also confirmed the crash with The Guardian,

In an interview with the Guardian, the head of Greece’s air traffic controllers board insisted there was “no chance” MS804 was still in the air.

“I consider it a fact that the plane has crashed. There is no chance of it still being in the air,” Serafeim Petrou said. “Most probably, and very unfortunately, it is at the bottom of the sea.”

The veteran 61-year-old air traffic controller clarified that the plane was lost on radar screens 18.5km “south of the Greek boundary” in Cairo FIR.

“It did not give any vocal or electronic signal before it disappeared,” he added. “Nothing can be excluded,” he said when asked what may have caused the crash.

“An explosion could be a possibility but, then, so could damage to the fuselage. I think at this point we are talking about wreckage, wreckage at the bottom of the sea and tracing the cause is going to take time.”

Greece has scrambled two C-130 military aircraft, two helicopters (a Super Pumer and Sea Hawk) and a frigate as part of a search and rescue operation now taking place 130 nautical miles south east of the Aegean island of Karpathos.

11:55 AM: AP reports Greek Civil Aviation Authority director declared the plane was in contact with air traffic controllers as it left Greek airspace,

The director, Konstantinos Lintzerakos, said the plane was at 37,000 feet, traveling at 519 mph, and did not report any problem.

Lyzerakos told private Antenna television that controllers tried to make contact with the pilot 10 miles before the flight exited the Greek Flight Information Range (FIR), but the pilot did not respond. Lyzerakos says controllers continued trying to contact the pilot until 3:39 a.m. Greek time (12.39 GMT) when the plane disappeared from the radar.

Lyzerakos says the plane was in Cairo’s FIR when it vanished.

11:15 AM: The former president of the French air accident investigation bureau, Jean-Paul Troadec speculated on the cause of the aircraft's disappearance saying,

“We have to remain very careful after the disappearance from the radars of the EgyptAir aircraft. The priority is to begin the investigation and to find, if possible, debris from the aircraft and eventually, the site of the wreckage. We can make certain hypotheses...there’s a strong possibility of an explosion on board from a bomb or a suicide bomber. The idea of a technical accident when weather conditions were good, seems also possible but not that likely. We could also consider a missile, which is what happened to the Malaysia Airlines aircraft in July 2014.

“If the crew didn’t send an alert signal, it’s because what happened was very sudden. A problem with an engine or a technical fault, would not produce an immediate accident. In this case, the crew did not react, which makes us think of a bomb.”

10:55 AM: Reuters claims that Egyptian civil aviation and EgyptAir officials have told them that the plane has indeed crashed in the water, ahead of an official announcement

"The theory that the plane crashed and fell is now confirmed after the preliminary search and after it did not arrive at any of the nearby airports," said a senior aviation source, who declined to be identified.

"All causes for the disaster are open, whether it is a major technical fault or a terrorist action or any other circumstance. This will be ascertained when we inspect the plane's wreckage and transcribe its black boxes."

10:30 AM: Airbus confirms that the plane was lost over the Mediterranean in a statement but avoids saying the craft crashed.

Airbus regrets to confirm that an A320 operated by Egyptair was lost at around 02:30 am (Egypt local time) today over the Mediterranean sea. The aircraft was operating a scheduled service, Flight MS 804 from Paris, France to Cairo, Egypt.

The aircraft involved, registered under SU-GCC was MSN (Manufacturer Serial Number) 2088 delivered to Egyptair from the production line in November 2003. The aircraft had accumulated approximately 48,000 flight hours. It was powered by IAE engines. At this time no further factual information is available.

In line with ICAO annex 13, Airbus stands-by ready to provide full technical assistance to French Investigation Agency - BEA - and to the Authorities in charge of the investigation.

The first A320 entered service in March 1988. At the end of April 2016 over6700 A320 Family aircraft were in operation worldwide. To date, the entire fleet has accumulated nearly 180 million flight hours in over 98 million flights.

Our concerns go to all those affected.

Airbus will make further factual information available as soon as the details have been confirmed and cleared by the authorities for release.

10:10 AM: An unconfirmed report coming from AFP cites a Greek civil aviation source saying the flight crashed 130 nautical miles off the coast of the island of Karpathos.

9:45 AM: Egypt's Ministry of Aviation says they will be holding a press conference regarding flight MS804 at 1:30pm local time.

8:46 AM: The Ministry of Aviation has announced that the missing airplane had crashed, according to Sky News Arabia, and that an official in EgyptAir had received a distress signal at 4:26 local time.

The plane is said to have disappeared and that "the possibility that the airplane has crashed has been confirmed" [by authorities] according to Chicago Tribute.

The Airbus A320-232 (12 years old) was roughly 60 km inside Egyptian space at the time, and 40 minutes away from its final destination and was going on its fifth flight for the day.

The passengers included 30 Egyptians, 15 French Citizens, 2 Iraqis, a passenger from Belgium, one from Sudan, one from Chad, a Portuguese and an Algerian citizen.

CNN was informed by Ahmed Abdel, airline’s vice-chairman that the plane had not made a distress call before disappearing and expects to have more information soon. He stated that “there were no recorded snags coming out of Cairo”.

Greece is helping Egypt in the rescue operation in the Mediterranean. Flightradar24 pinpoints the last point of contact, and that was at 37,000 feet. Two aircraft, a C-130 Hercules, and an early warning aircraft have been dispatched from the search.

French President’s office has just stated that the French government to hold an emergency meeting very soon in order to discuss the disappearance. President Francois Hollande has spoken to President Abdul Fattah el-Sisi about the two countries cooperating together to find out more information about the missing aircraft.

A similar incident occurred in March when a plane was diverted and hijacked by a "psychologically unstable" man in Cyprus currently in custody. This was following the crash of a Russian plane on 31st of October last year killing 224 passengers. Moscow claimed this happened through an explosive device, an act that the Islamic State claimed to have undergone.