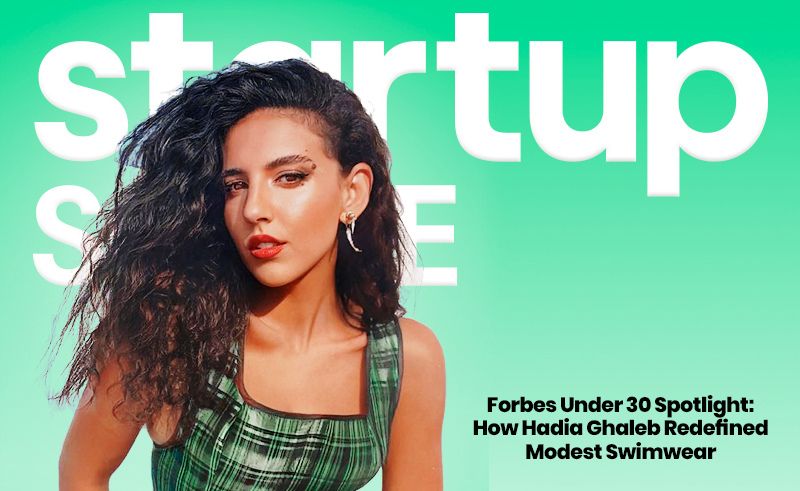 The Forbes Middle East Under 30 Summit is a celebration of entrepreneurs, artists and innovators who have impacted the region through their work. With this being the first time the summit is held in Egypt, we’re spotlighting some of the local names who have made it on the Under 30 list. One such individual is Hadia Ghaleb, founder and CEO of MENA-based digital marketing agency Ghaleb Production House, who has been on a mission to make modest swimwear inclusive for women across all backgrounds by launching her own swimwear line, Hadia Ghaleb Label.

Launched in April this year, the new brand aims to end the division between veiled and unveiled women not only in the region, but across the world. With more than eight years’ experience in running her own communications agency, Ghaleb Production House (GPH), the Egyptian entrepreneur first became passionate about creating an inclusive swimwear line after seeing her friend getting banned from entering a beach resort because of her choice of clothing.

“I was with a friend dressed in modest swimwear and we were banned from entering a beachside resort without any viable explanation,” Hadia Ghaleb, founder of Hadia Ghaleb Label, tells StartupScene. "Instead of going the usual route of social media to voice my frustration, I started thinking about what I could do to actually be effective and maybe inspire change.”

It was then that she decided to create her own modest swimwear line. Although the idea was initially thought of in 2018, it wasn’t until 2022 that the brand was officially launched.

After only a few months since launching, the swimwear collection was already sold out in 32 countries worldwide. As a result, Ghaleb is now taking pre-orders online for the same collection and is soon planning on selling the brand in leading department stores across the region, such as Galeries Lafayette in Qatar.

To create the swimwear line, Ghaleb chose to bootstrap the business instead of seeking outside funding. She used some of her personal savings from years of working at GPH and invested it in the brand. “It was a very big risk for me, but I had faith,” she says.

Indeed, the risk paid off, but not without putting in the hard work first. To get her brand off the ground, Ghaleb launched a campaign in the Maldives with fashion influencers from the Middle East, including Hadia Ghaleb herself, Yusur Al-Khalidi, Maryam Al-Khalidi, Noor Stars, Assallah Kamel, and Shouq. “We chose influencers with a large following and made sure to include one girl from each country: Iraq, UAE, KSA, and me from Egypt,” adds Ghaleb. “I believe this was one of the reasons why it was so successful.”

But that’s not the only reason the label found success so soon after launching. Modest fashion is big business. While modest swimwear, or burkinis, may already be available in many clothing stores, it’s still considered a nascent market, and one with big potential.

According to the 2022 State of the Global Islamic Economy Report, spending on modest fashion increased by 5.7% in 2021, up from $279 billion to $295 billion, and the sector is projected to reach $313 billion this year. Iran, Turkey and Saudi Arabia are the largest markets for modest fashion, but the industry is also gaining prominence outside the region. The modest fashion community outside the Middle East and Africa is expected to reach a value of $170 million in 2022.

“There is an amazing market gap,” says Ghaleb. “From a business standpoint, no one is offering this. I’m the first one to offer it. Now I know that next year, I will face huge competition, but at least I opened the market for a new product offering.”

Burkinis may represent a growing market opportunity, but Ghaleb was initially apprehensive about entering this business, particularly since her product line was different to what’s usually being offered in the region, and even globally. “Going into this, I knew that it was going to be a make it or break it,” she says. “It’s either going to be super successful or I’m going to get a lot of backlash.”

Unlike traditional burkinis, which are usually black and relatively simple, Ghaleb’s collection comes in a variety of styles, colours, and pieces, transforming what is normally thought of as reserved swimwear into something that is also fashionable and trendy.

“I knew I was going into uncharted territory, and one with a lot of controversy,” Ghaleb says. “I’m not selling or offering something that is already in the market. The alternative in the market is so conservative. They are only black, two pieces, and they’re not flattering at all. So, going into this I knew that I have either a lot to gain or a lot to lose. I knew it wasn’t going to be in the middle. So, thank God it was on the positive side.”

It was the brand’s unique offering that made it appealing to women, regardless of their lifestyle choices. Designing the swimwear herself and drawing from her own inspiration, Ghaleb wanted to change the perception of modest fashion by creating elegant designs that complement all women, no matter their fashion styles and backgrounds. And while the swimwear line is modest, it is not only for covered women.

LOOKING TO THE FUTURE

Ghaleb plans on expanding her collection to include not only burkinis, but accessories such as bags, sandals, and other items. She also wants to make her products available in department stores across the region.

“We are starting to sell now in Galeries Lafayette in Qatar, and also want to sell in Harvey Nichols in the UAE,” Ghaleb says. “We want to be present in all the big department stores in the region and internationally.”

At the same time, Ghaleb is looking to change how her products are assembled. Instead of sourcing products from Turkey and China and assembling them in the UAE, Ghaleb is planning on producing everything in Turkey next year, and Italy in the near future to further scale her swimwear line.

Her ultimate goal, however, is entering the US market. Although the brand’s biggest markets are Saudi Arabia and the UAE, selling 25% and 15% respectively, she wants to target the US in hopes of further changing perceptions of modest swimwear globally.

“I want the US to be one of the biggest markets we sell in, because I want to be able to say that I was able to change the minds of people,” Ghaleb says. “My dream, which I'm working on right now, is to see someone like Kylie Jenner, Kendall Jenner, Bella Hadid, and other A-list celebrities wearing them, and feeling that they’re elegant and trendy. For once, I want the trend to come from the Arab world, and not from the West.”