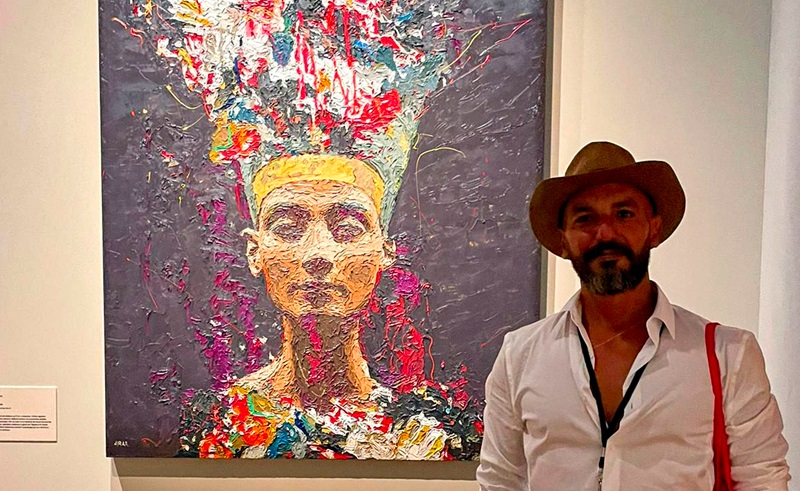 What makes ancient Egyptian royalty so iconic, and what is the impact they've left on us? Those are the questions that Pharaoh Superstars, an ongoing arts exhibition at the Mucem Museum in Marseille, France, attempts to answer through a multitude of artistic mediums including hieroglyphics, pop music and classical paintings. Amongst them is figurative Egyptian artist Hossam Dirar, who is displaying dreamy abstractions of Queen Nefertiti through a series of oil paintings with dramatic strokes and bursts of colour.

Inspired by the elegant yet mysterious beauty of Nefertiti, Dirar created a series of 25 paintings that reimagine modern representation of women by viewing the ancient queen as a symbol of future, rather than the past. Many view Nefertiti as a symbol of empowerment, encouraging women to stand for their beliefs during a time entirely incomprehensible to the modern mind. Dirar’s Nefertiti seems to link the ancient with the contemporary with thick brushes that are contrasted by majestic features of the Egyptian queen. Dirar’s technique orchestrates organised chaos that appears from afar as though brushstrokes were swung wildly, however, at closer inspection, the paintings’ textured layers, control and definition become clearer.

Born and raised in Cairo, Dirar’s acrylic paintings have made their mark with his distinctive take on abstract expressionism, and has been featured throughout Egypt and internationally including Los Angeles, USA, Athens, Greece and Edinburg, United Kingdoms.

As seen on the cover of Paris Match, a world famous weekly magazine in France, Dirar’s exploration of Nefertiti illustrates her memorable depth with a unique vision. ‘Pharaoh Superstars’ is currently running at the Mucem Museum until October 17th, before it moves to the Calouste Gulbenkian Museum in Lisbon from November 24th to March 6th, 2023.