We speak with Egyptian-Welsh filmmaker Sally El Hosaini about her critically acclaimed refugee drama, 'The Swimmers'. 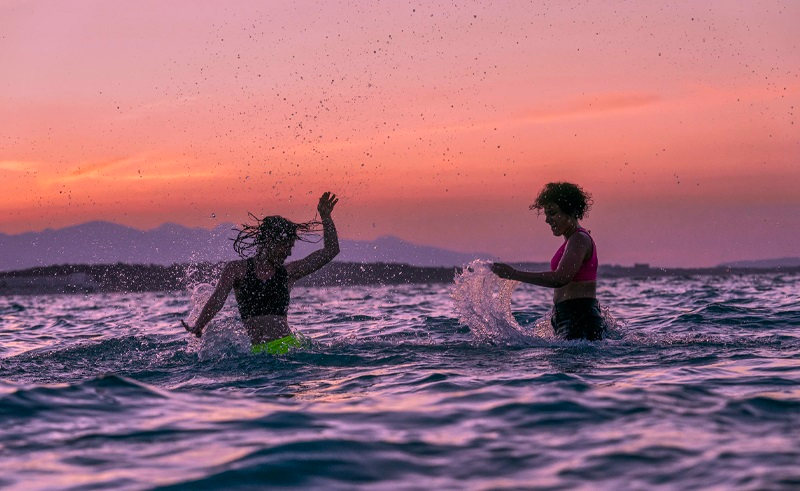 Critically acclaimed film ‘The Swimmers’ has gotten people talking ever since its world premiere as the opening film at the Toronto International Film Festival, followed by its MENA premiere at the Cairo International Film Festival. Now, it is one of Netflix’s most streamed films upon its release, and the conversation has never been more inspired. Directed by Egyptian Welsh filmmaker Sally El Hosaini, ‘The Swimmers’ depicts the story of sisters and Syrian refugees Yusra and Sara Mardini, as they swam from war-torn Syrian to the 2016 Rio Olympics, inspiring millions around the world in the process.

El Hosaini was one of many who were enraptured by the Mardinis’ heroic story, eventually leading her to reach out to the sisters to bring their story to the silver screen, along with the struggles and triumphs of refugees at large. The film starred real-life Lebanese sisters Manal and Nathalie Eissa as the heroic duo, Egyptian actor Ahmed Malek as their cousin Nizar, Syrian actress Kinda Alloush as their mother, and Palestinian actor Ali Suleiman as their father and trainer.

Over the course of her career, El Hosaini won multiple awards including a British Independent Film Award for best debut film ‘My Brother The Devil’ (2013) and a Sutherland Trophy for Best First Film at BFI London Film Festival. The screenwriter and director spoke to CairoScene on her journey to bring this story to life, from her deep dive into Yusra and Sara Mardini’s playlists, to the complexity of representing the nuances of the refugee experience…

How did the film, as well as your collaboration with Yusra and Sara Mardini, start?

Yusra and Sara Mardini were involved throughout the film’s creation. Getting to know them and their story first hand was essential. When I first read Jack Thorne’s script, what made me want to make this film was how it focused on the story of not just the celebrated hero in Yusra, but the unsung hero in Sara as well, which was very clever, in my opinion. It was beautiful how their relationship went from competitive to true sisterhood by the end of the film.

Throughout the film we see the characters switch between English and Arabic, which is common amongst Arab youth. How did you go about that in the script?

When I first came to the project, the script was all in English, and it was actually a tough battle, in the beginning. I wanted most of the Syrian sections to be in Arabic. When Netflix came on board, they really understood this, because they have a global audience. It was so important to portray Yusra and Sara Mardini accurately as bilinguals. The reality is, once they started the journey, they were around a lot of people who didn't speak Arabic, so English became the main language among the other refugees.

Even Yusra and Sara discovered that they began to speak English when, sometimes, speaking in Arabic would feel painful and hit too close to home. They would only switch to Arabic when they didn't want people to understand them, or if they were angry or upset. It was a very intuitive decision that I had discussed with Manal and Nathalie Issa extensively. Sometimes, on the set, the dialogue would come out in Arabic or English, and we would go with it.

The film is about war, but in a sense, joy is a running theme. How did you create this balance?

Tonally, it was very important for me to show how even in the darkest times, we laugh and get through it all with humour. During the toughest times in my life, I got through them with humour, and I saw that it was the same with Yusra and Sara as soon as I met them. I discovered that this was how they coped and survived. It’s a very human thing, and we don’t see it a lot, especially in ‘tragic movies’. It was important for me to sort of show the light in the darkness, and it really helped us connect with that humanity.

What was the process of fictionalising Nizar, played by Ahmed Malek, like?

We couldn't make a movie that was just about the success story, so by fictionalising Ahmed Malek’s character, we were able to leave him in limbo by the end of the film, representing the fate of 99% of refugees. Yusra and Sara’s experience in a sense represents the 1%, and we were able to honour the majority and add humour through his character without worrying about representing a real character in a way they wouldn’t like. Ahmed Malek was wonderful as Nizar, he’s a breath of fresh air, and he really brought some levity and lightness to the movie.

The film’s playlist featured diverse choices, from Sia to Sharmoofers, how was it curated?

I asked Yusra and Sara for their playlists. I was very interested in what they were listening to when they left Damascus, but also in general. I asked Yusra about the songs she listens to before a race, and asked Sara, Nathalie and Manal about their favourite music. Even though ‘The Swimmers’ is a period film set in 2015, we made a decision to use Arabic music that’s current and contemporary. I wanted to draw a parallel between the youth of today, and Yusra and Sara’s story. It felt like the spirit of the sisters and the world. Sia’s song came because Yusra's playlist was all Sia and all Eminem, and I preferred Sia, and these songs actually kept her going and kept her motivated.

What was the response like at the Cairo International Film Festival screening?

It was nice to come home, and the response at the Cairo International Film Festival was wonderful. I grew up in Egypt, and it was my first time showing the film to an Arab audience, so it was really special. It was an honour having the film’s regional premiere at CIFF. People in the theatre were laughing, crying, and cheering when Yusra won the race.